It’s been awhile now since I have posted anything other than a poem as of late, but I just had to share this. So, I’ve been watching Three’s Company for the last few days (OK, that just dated me) and it’s been quite the unexpected nostalgic experience, and soooo funny. I found this YouTube channel that has all the episodes, I have been binge watching each one of them before they get taken down. Jack, Janette, Chrissy and the Ropers were on a lot at my house when I was growing up and it’s been bringing up a lot of fond memories the more invested I’ve become. 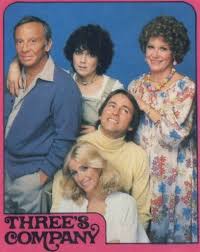 If I remember correctly, the show was usually on just after suppertime, my Pop was always planted firmly in his chair, he loved him some Jack Tripper. My Nan just finishing the last of the dishes, the same time each evening, everyday, we were all waiting to see what Jack and the gang were up to. What misunderstanding will be misunderstood on tonight’s episode? I remember vividly, my aunt and uncle who had just gotten off of work from the fish plant and them both still having a distinct perfume of fish that would usually whisk pass my nose. My aunt always did say how brutal it was trying to get rid of the constant tinge of the fish, after a twelve hour shift. I will never forget that. Yes, we would all consume the living room, trying to score a spot on the tiniest of couches, some resorting to the arm of a love seat, maybe the coffee table or lastly, the floor. All this didn’t matter, shhhhhh……the theme song has started,”Come and knock on our door”….

It’s true, the fondest memories can be drawn from the simplest of things, for me it was this TV show. It brought the nostalgia completely out of me, made me think about people I haven’t thought of in awhile, it was nice. The same is hard to do these days in the same context with the accessibility of digital content, and how sitting around the TV the same time each week is not a thing anymore for most people. Direct, custom content although convenient, can also cause a disconnect where everyone usually retreats to their own devices, unfortunately it’s a thing. I think it’s important to make time for each other, create memories that will forever channel happiness. I know this is am example of screen time but it can be anything you want it to be. How nice it is when something puts a smile on your face? We can all use a little of that.

Yeah, it’s that kinda comedy, but you know what? I’ve been having a good laugh these past few days watching the pure genius in physical comedy that was the comedy of John Ritter, who we all know died way too early. My cousin Amanda, says that when she sees him on TV, he reminds her of me, lol.  All the cast were great, it was a perfect ensemble, a timeless comedy. Watching Three’s Company has been stirring up some pleasant memories for me, memories that will forever make me recall a simpler time in my life that I will hold dear in my heart for the rest of my life.

This blog was taped before a live studio audience.

Writer, Poet, Thinker, Paralegal, Miawpukek First Nations, GymLife, Runner, Bike Writer, & Pun Enthusiast I like my puns intended. ✍️ “I don’t claim to be a great writer, but I’m enjoying the journey of becoming one” View all posts by Ash Douglas